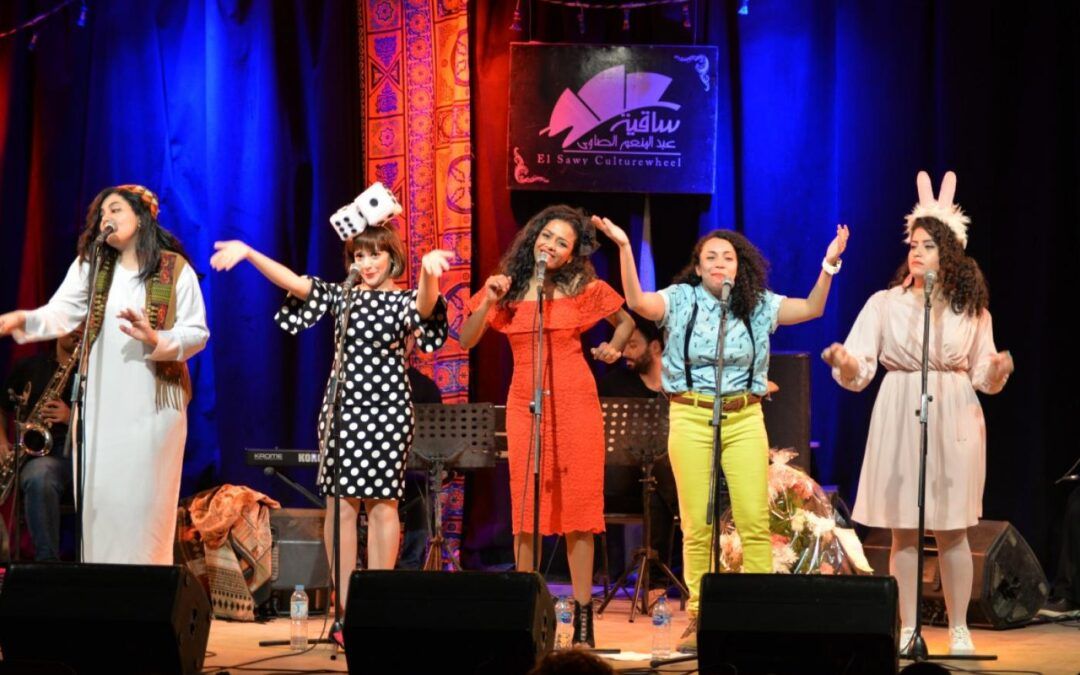 Egyptian musical troupe Bahgaga revives the lost artform of comedy musical monologues, with their own twist on love, politics and equal rights for all

A woman steps onstage at Cairo’s El Sawy cultural centre. The room is packed with a mixed audience of all ages. She picks up the microphone, eyes closed as she sways and begins to sing Nancy Sinatra’s version of the Sonny and Cher 1966 hit, Bang Bang (My Baby Shot Me Down).

I was five and he was six
We rode on horses made of sticks
He wore black and I wore white
He would always win the fight
Bang bang, he shot me down

Another woman suddenly stumbles onto the stage, swaying and teetering wildly as she grips a bottle of beer and starts singing to the tune of the same song. But the lyrics are totally different to the original, and they’re belted out in heavily accented English.

My baby killed me
He stabbed me, in my back
Why baby…

She then switches to colloquial Egyptian, with some English words tossed in for effect.

What can we say? He was my superman, the only super-anything
There is no super but he
Who can believe that my baby stabbed me in my back
Why baby?

Peals of laughter from the audience accompany the woman’s subsequent faltering and inevitable collapse onto the planks.

The two singers, Samar Galal, 31, and Weam Essam, 30, are members of Bahgaga, a five-woman band reviving the traditional comedy musical monologue in Egypt, a form of light-hearted acting and singing skits, inspired by everyday life and current events. The artform, which had its heyday in Egypt in the mid-90s, is today mostly seen on classic TV movie repeats.

Bahgaga’s sketches are a catchy mix of covers of classic musical monologues and newer pieces with original lyrics and music. Some of the lyrics of their newer performances are written by young Egyptian poets and Bahgaga founder and music producer, Ayman Helmy.

“I formed the band to present something new, something that would be funny and at the same time include some acceptable social criticism,” Helmy tells Middle East Eye.

Bahgaga came together in 2015 after Helmy posted a note on his Facebook page calling for female comedy singers and actors to audition for a one-time performance. Forty women applied, but only five got through.

Their first project would be a one-time performance and they prepared for it over two months of workshops. The future of the band was riding on the success of this first show, Helmy says.

Bahgaga, which means joy in Egyptian dialect, reflects the band’s aim to help people look on the bright side

“At the beginning I wasn’t sure if a performance by a female-only monologue troupe would be acceptable by the audience or not,” says Helmy. “But I was amazed when the event attracted people of all ages. I didn’t imagine that level of success. It showed that people are keen to see this kind of art.”

Helmy then went on to hire several male instrumentalists who perform on a rotating basis on instruments including the oud, keyboard, accordion, tabla (oriental drums), violin, bongos and cajon.

Bahgaga, which means joy in Egyptian dialect, reflects the band’s aim to help people look on the bright side, like in their song, Depression is Forbidden, where they ban their listeners from thinking about anything negative, include politics:

“Today’s monologues are different than the old ones in terms of topics and the ways we act them out. In Bahgaga, we focus on topics related to women, like spinsterhood, shopping, work, relationships with men and their tricks,” says 26-year-old band member Sherouk El Sherif, who graduated from Cairo’s Conservatoire (Higher Institute for Music) and sometimes plays the flute in some of the band’s songs.

“I found what I wanted by joining Bahgaga, which merges the two talents I love: singing and acting,” she told MEE.

The growth of the musical monologue

Comedy musical monologues in Egypt emerged with the onset of theatre in the early 20th century. Early monologue artists recognised a need to bring in an element of comedy to the seriousness of theatre and drama.

The artform became widely popular in the 1930s, with the growth of Egyptian radio broadcasting. But it took the development of the cinema in the 1940s for the form to begin to appear in its visual form once again and musical monologue performances began to be included in popular films.

“Every monologist has their special style,” says singer and radio and TV presenter Zahra Ramy, who presented a radio series on the history of the musical monologue earlier this year. “They each had beautiful voices that helped them become famous through their singing, but they chose the monologue art as a niche,” Ramy told MEE.

One of the pioneers was Omar El Gizawy (1917-1983), a prominent monologue artist born in the Upper Egyptian city of Asyut. El Gizawy was famous for playing the role of a saidi, an Upper Egyptian dressed in a traditional loose-fitting robe.

Another popular monologist of El Gizawy’s generation was Mahmoud Shokoko (1912-1985). A skilled carpenter, he drew on the problems of the Egyptian working class in his sketches, from expensive public transport fares to the increase in the price of meat.

“This art is rich,” Ramy said. “It incorporates personification and can tackle a wide range of topics, as well as acting and comedy. Only a monologist can make people laugh about a dramatic subject.”

The topics Bahgaga tackle are related to current social issues, but all played out as comedy – they joke about everything, from politics to love.

One of their skits is named after a matchmaker – an “Auntie Dosa” who has made the singer “hate Thursdays, when she comes to visit with news of another groom”:

No, Auntie Dosa, I don’t want you to come and see me
I want you to know how I’m feeling and have a little mercy
we’re not talking business here

According to Helmy, their songs are often based on suggestions made by the band themselves: “Weam Essam [who acted drunk in the performance] suggested the Bang Bang song and to blend a bit of drama and fun. Together, we think of these kinds of fusions.”

“I feel that the [musical] monologue needs to always stay current, to address today’s social issues and to attract more of the young generation to listen to us,” says Essam, who used to sing in theatre productions at university. “We can make the lyrics more modern, but we can do that with the music too.”

Another of the band’s members, Raghda Galal, says that one of the things she loves about the performance is that she is able to interact with the audience.

In one of their songs, a cover of a classic originally performed by folk singer Khadra Mohamed Khedr in the 1950s, called La wennabi ya Abdo (No, I implore you, Abdo), Galal performs in traditional dress.

In the song she singles out a member of the audience and addresses one of them directly, as if he is the “Abdo” in question:

I climbed up to the roof to complain to the air about you
To tell it what happened and everything you did
How you abandoned me and let people gloat and pity
And there’s still more to come
No, no, I implore you, Abdo

Sometimes, the audience interacts in return. At the end of their song 20 pounds, please, where they pretend to be workers complaining of a lack of rights in the workplace, Galal says often a member of the audience will “hand us some chocolates, flowers or even a real 20 [Egyptian pound] note!”

Presentation is key to this theatrical art form and Bahgaga know this well. Art director Rehab Rihan was brought on board early on to manage everything from costumes and stage lighting to decor.

“The image is important for this type of art. Because of the band’s name [joy], the colours must be strong and bright,” Rihan told MEE.

She coordinates the costumes and decor of each performance in accordance with the corresponding venue.

“Before every concert, I visit the venue and see what improvements I can make to make it suit the nature of the band,” Rihan says.

“For example, if the venue is a closed hall and the stage is black, I style clothes in bright, strong colours. I also mix between folk and modern clothes. I add lightening elements that reflect folk art, such as coloured lights or khayamiya [a decorative applique textile].

“It is an Egyptian art, our own art, so the visual imagery must reflect this fact.”

By the early 21st century, the comedy monologue had practically fizzled out, eventually evolving into a form of stand-up comedy, mostly devoid of the political and cultural criticism it was once known for.

A handful of bands, including one that Ramy herself was a member of, tried to keep it alive in some form. The band, Ayamna El Helwa (Our Beautiful Days), is a group of around 20 singers who perform covers of nostalgic songs from classic films and TV series, including some monologues.

Although Ramy says she was “proud to be a monologist”, she left the group in 2018 to form her own band, Mixer, where she sings and is accompanied by male musicians. Mixer will hold its first concert on 30 October, including in their set a mixture of songs and comic monologues. Ramy also performed during Bahgaga’s fifth anniversary celebrations.

Like Bahgaga, Ramy is keen to revive the traditional art, and show people that it’s more than just light banter.

“I want to let people differentiate between this deep-rooted art and telling jokes. [And] I encourage more women who are talented at singing and acting to take up this art,” Ramy says.

“I hope it will spread because we need this kind of art to help us break from our daily routines. We need to laugh.”